Viruses are ancestors whose origin dates back to the earliest beginnings of life on the planet.

Maybe that’s why their imprint is everywhere in living things. Their omnipresence can be seen even in our genetic material, which contains between 5 and 8% viral DNA.

Viruses are most prevalent in the marine environment. In a single spoonful of seawater, there are more viral particles than the entire population of the European continent.

Even more spectacularly, it is said that every time we go swimming, we absorb more than a billion viruses.

Because the viruses in our biosphere are also airborne, hovering above us and falling down, about 800 million viruses are deposited daily on every square metre of the earth’s surface. In other words, we live on a planet where viruses are constantly raining down.

Corona is the new Messiah? 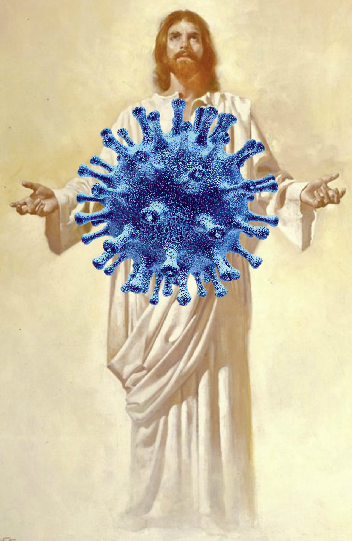 I believe that the Unverse has its way of rebalancing things and its laws, when these come to be too upset. The moment we are living in, full of anomalies and paradoxes, makes us think…

At a time when climate change, caused by environmental disasters, has reached worrying levels. Then the Corona virus has first China, and then so many other countries, forced into a standstill; the economy is collapsing, but pollution is decreasing dramatically.

At a historic moment when, throughout the world, certain discriminatory ideologies and policies are being reactivated, strongly reminding us of a petty past, a virus is coming, which makes us experience that, in an instant, we too can become the discriminated, the segregated, those who are blocked at the borders, who bring diseases. Even if we have nothing to do with it. Even if we are white, western, and travel first class in our all-powerful complex.

In a society based on productivity and consumption, in which we are all running for 14 hours a day after each other, without Saturday or Sunday, without a break in the calendar – then all of a sudden the STOP comes. Suddenly we are all at a standstill, at home, for days on end; counting the time that we have lost the value of, as soon as it is no longer measurable in money, in profit. Do we even know what to do with it yet?

At a time when the education of our own children, by force of circumstance, is often delegated to various figures and institutions, the virus is closing schools and forcing us to find alternative solutions, to reunite mothers and fathers with their own children. It forces us to rebuild a “family”.

In a dimension where relationships, communication, sociability, are essentially played out in this non-space of the virtual of social networks, giving us the illusion of proximity, the virus takes away the little real closeness, that we still had: no touching, no kisses, no hugs, distance. Corona puts the poverty of our virtual relations right into our face!

In a social climate where thinking of oneself has become the rule, the virus sends us a clear message: the only way out is reciprocity, a sense of belonging, of community, of feeling part of something greater, something to be taken care of, something that can take care of us. Shared responsibility, feeling that our actions depend not only on our own fate, but on the fate of others, of all those around us. And that we depend on them.

And the letter from our new friend corona, totally fits the context; it has been brought to you by Darinka & Kristin:

“I will help you. I am a messenger, an ally, a force that will restore balance. Hear me out, I will be howling at you until you do. So stop; be silent and listen.

I know you feel scared at the moment. Do not give into fear; do not let it overpower you. Listen to what I have to say, listen to my wisdom.

Look around you – I give you everything that you wanted for such a long time.

I will help you if you listen to me.”

If all this sounds quite right to you, you may discover also that the environmental, social, political and economic effects that appear in the wake of the virus are exactly what we wanted for such a long time. In this sense we could say that we actually have created the virus; for many many years we have been directing our wishes to the Universe. And the Universe has responded with exactly what we were asking for.

But in a way “against our will”. It looks like the Universe had decided to do away with us, the cause of all the trouble our poor Mother Earth and our fellow men have to endure. That looks like a punishment.

However, in the Universe there is no punishment; only consequences: if you constantly deny your Soul, your Soul fill finally stop supporting your body = the physical death. That is the Hard Way.

And the soft way on the other hand is that we only have to get closer to our Soul, to live in the understanding that striving only for the Good of All includes us.

In this way Corona is indeed a messenger from the Center of the Universe, from the Creator or from God if you wish.

The corona virus, seen through the ancient Chinese wisdom

Someone gave the corona baby 4 amino acids to set it on its mutating exploration on this blue planet. Little virus equipped with the understand how to hide itself, no desire to compete with anything, just silently learn and copy human’ surviving skill. While they are concentrating to explore human’s lungs, they know how to hide from the detection, how to control temperature in floating, but they have no brain, how do they copy humans’? However, Mr. Keshe said, that the virus has a soul, it has a brain….

These definitions of living beings are something that the world of medicine cannot understand. It’s hard for people to comprehend that the so-called “thoughtless” are infact single chain (RNA) virus. DNA is physical, RNA is emotional. Since corona virus is RNA single chain, it could sense how the host thinks and feels, because it has not only an amino acid but also an emotional connection. If the host has weird thoughts, it will follow this path to mutate faster; if the host has deep and calculating personality, it will follow to camouflage; if the host’s desires are weak, it will have a slow growth rate; if the host’s desire is strong, it will be fast growing.

So we see that the virus will show different symptoms in different persons. Someone has light sickness, some has a long one, while some die very soon, some even don’t have any symptom. Even some people may evolve thanks to this virus.

The virus’ activity is not based on our physical condition, but on the emotional one. This is an unknown territory for most human being. There is a writing of Sun-Tse from “The art of war”, where he says that “First attack the emotion of the enemy, then grind the fortress.” The difference between virus and germ is that the germs work on the physical cities, while the viruses work on the leader of the enemy troops, once it can take the leader’s emotion, then the physical strength of the castle is not an issue anymore. The virus takes over the control to the cells, he begins a revolution. But our body cells also are “thoughtless” living beings; they are driven by the interaction of the emotion and the soul.

If people who get infected have a compassionate character, they may allow the virus to stay in the body and let them have their naughty play for a little while, they probably just cough a few days, then get better and become healthy again. Moreover the virus could help these people to plant the evolutional seed which will save these people’s life for the changing environments to come.

But if people are not compassionate enough, if they have beliefs such as “you are different from me, you are my enemy”, then they will mobilize more white blood cell troops attack indiscriminately, even their own body cells. This will not only destroy the evolutional seeds, but also these people themselves.

The world of medicine keeps on ignoring how human emotions interact with the virus, just because the emotion cannot be quantified, which means, they fail to see the karma and the quantum entanglement behind all these phenomena. We have to understand, how our each of our organs have come to take their particular shape, they are all formed with the help of viruses. Thanks to their existence, the species on earth became diversified. If the human beings want to survive in this century’s plague, they have to follow the four solutions

Who is this virus?

The WCV has originally been manufactured and genetically modified to wipe out the Chinese race. However the virus did not stay confined to China, it quickly spreads throughout the world and nothing seems to stop it. To be able to jump from one race or country to another, the virus needs to mutate. The mutation is the way the virus adapts itself to a new environment = another race. And every time it mutates, it becomes stronger. The mutation follows the blood lines, the genetic connections that have been created by mixing our blood during centuries; thus the virus simply follows the genetic pathways laid out in our DNA.

The WCV has emotion

You probably remember that viruses don’t really spread by physical contact, by using the pathways of the material plane – they are plasmatic energy entities which move like energy. In this sense they are not physically transmitted but they are recreated in the receiver. We learned that the WCV has been created by the emotions of caged and illegally sold wild animals, because they were put by us in an unsupportable distress.
That’s why the WCV has emotion. And therefore people who feel like being encaged, can produce the same virus because their emotion is of similar field strength than that of the virus. And the virus being an emotional entity, settles of course in the lungs which psychosomatically correspond to emotions. This is how our Soul talks to us – she shows us in every moment how and what we are doing in regards to her. And remember our Soul is not a policeman, the sole wish of our Soul is that our body and mind are totally happy!

The WCV has a soul
The virus has a double crown (that’s why it’s called Corona = Crown virus). One crown has the field strength of the different amino acids, the bacterial link; the other the strength of the virus, the energy pack. The two components or plasmas interact, thus creating something like a mind, some kind of a “free will” which consolidates and enhances it’s capacity to mutate. In this way the virus can, so-to-say decide where it wants to go.

“You have a Soul, the Virus has a Soul and the 1C=1L(the intermediary) has a Soul. The intermediary brings balance to both. That’s why you are safe with this Technology.”

Viruses are part of our life – and this will become even more evident when we travel in space; so we have to learn to respect them and to live with them – they have a Soul.

This virus was tailor-made instrument to kill, now it has put itself in control.” M. Keshe