The Portals are already here 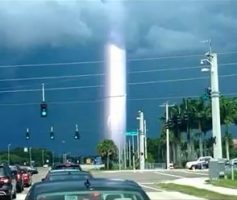 This article describes obviously another form of portals; bigger ones. Maybe these portals are initiated by other beings of the Univers. It seems that There are many of these ‘light cylinders’ appearing foremost inAt the same time Carolina announced that the development of the space ship (flying by the power of our soul) has been suspended for the moment because of an intervention of the Universal Community. The latter had announced that the Human Race is not yet ready to fly into space… so the portal seems to be the way to go for the moment, because if we get to meet other members, we can feel them and their urge that we change towards universal Peace. And that would help us develop the urgency inside us to change, right?! 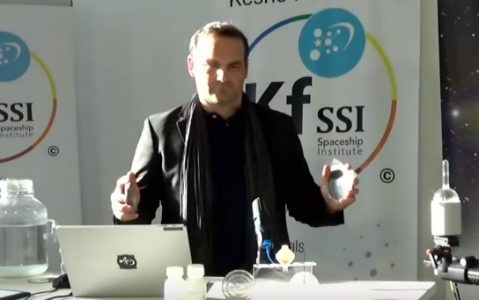 The German speaking team of Dr. Klaus made a plasmatic noise generator according to the guidelines of M.Keshe. The generator, working without any motor – only by dynamic plasma fields – generated a lot of noise which scrambles any machine-made frequency for communication. At the same time they made a new sort of Plasma Field Mirror: 2 discs which had undergone many many nano-coating processes which took more than 3 months. Dr. Klaus is holding them in his hands on the photo. During a live video event, these mirrors amplified and directed the plasmatic fields created by the noise generator. At a certain distance of the mirrors to the camera and microphone, all communication broke down – no sound, white screen. According to M.Keshe this is the first public demonstration of the Plasma device which will make all conventional modern weaponry obsolete. Today’s arms are fired and guided by frequency and this special plasma field makes all communication by electronics or wireless means impossible, thus rendering them useless. 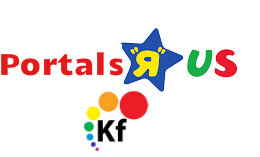 A portal is an ‘eye into the future’, an opening into another dimension. The soul of the man has her own portal created by it’s physicality for its own transportation and communication on a higher than the material level. We can better understand a portal when we look at the position of the soul in respect to the physicality. 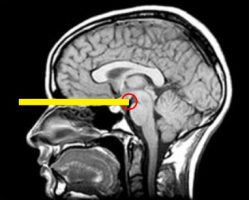 When we look at the structure of the scull and the brain, we see that the soul is this tiny black spot on the crossing of the line between the eyes with the line between the ears. This black hole is the portal. It is important to understand that the eye and the soul share the same channel, the most important portal of life. The vision is a soft-tissue axis; the soul somehow looks right through this axis of the eye. The channel works in both directions: the soul sees through the same channel as the eyes, and the eyes are the windows through which we can see another soul. 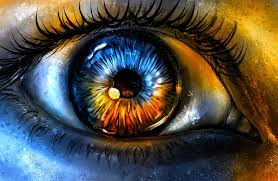 The special connection between the eyes and the soul shows also in our dreams: almost always our dreams are visual, because the soul sees through the eye in both ways – during the day, outside to inside and during the dream inside to outside. To be more precise, in a dream we allow our selves to share the vision of the soul; in the so called waking reality, we limit ourselves to the physical vision of our material eyes. This explains as well some near-death experiences where a person physically dies on the operation table and the soul moves out of the body and is able to see the whole space where the operation takes place ‘from above’. So the physical structure of the eye is not the important part of the vision. So we have always two ways of perception: we live in the material world perceived by our physical eyes and we live simultaneously in the spiritual world, seen by our soul. This is also reflected when someone says: “Oh i have seen this coming, i had a premonition that this would be happening in exactly this way!”. This could mean that the soul has seen what will be happening before you could; the soul does not live in a time-space continuum which is proper to the material realm only. But this could also mean that the soul tells you what is going to happen, when you don’t change course… Actually when we speak of clairvoyance, we acknowledge the ability of a person so see with the eye of the soul. Was has been taught in this session so far can be likened to the teachings of Buddhism and Taoism in the sense that you can fool yourself believing that the reality of all things is inherent in them… or you can be wise and know that what you see is always coming from you. There is nothing out there existing on it’s own – all is so to say projected by us onto empty canvasses.

Buddha and Lao-Tsu looked through the eye of the soul while the Judaeo-Christian religions as well as Islam looked through the eye of the flesh, which sees the world always through punishment, suffering and lack, The Asiatic religions are much more comprehensive of the totality of the universe, way beyond the western materialism; therefore the enlightenment about the way of the soul will come mainly from the east. But still there is a little reflection of this even in Christianity; in the so called holy trinity: the father represents the Creator in us, the son is our Physicality and the holy ghost our Soul. There cannot be any problem between the creator and the soul – conflicts arise only when the son (us as a personality) uses his ‘own’ free will and decides to resist the perfect dance between the Creator and the Soul. Mostly we are so engrossed in the material plane that we can be totally oblivious of the spiritual world that is surrounding us as well. To see this world, we have to open our inner eyes… we have to allow the channel also for non-physical perceptions. The soul never sleeps but the eye and the physical body need times of sleep, to regenerate; because it is replenished as it uses energy because it is not separated from the Universe. The same applies to sleep, food, breathing air and all other physical ways in which our material part needs to restore itself. But once we venture into space, we have to be able to live beyond physicality, what do we do with all that time suddenly available? If we can increase the strength of the soul relative to the physicality, the whole universe and it’s functioning become visible to us. Once we can do that, we will see that the eye is one of the most powerful tools. In this context we may as well remember that the matter state is a special, low energy state of Plasma and not the other way around. In the same logic, our body is not the first reality but only an appearance of the plasma fields emitted by our soul. In this sense we would be closer to reality if we would visualize or see the appearance and the workings of our body as a projection of the soul that we are; and stop trying to find the tiny soul inside our body… we are a soul enjoying a physical experience and we are not a body with a soul hidden inside it. Now how can we convert the vision of the soul into the physical images? Through our understanding. Going back to medical teachings, we see that we have developed tools and machines that confirm certain conditions on a material plane only; we have not yet developed or focused our attention to get confirmation of existence on the soul level. 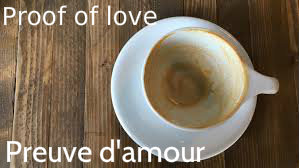 In regards to feeding ourselves, we believed that when we eat a banana, the nutritional values of the banana (vitamins, calories, minerals etc) are transported through the intestines and the blood to where they are needed. Now with Plasma Science we know that this is not accurate; the banana transfers only it’s fields to our body and there is no absorption whatsoever of any material, only fields strengths are transmitted. So: Then of course it becomes important how we perceive the beings that share with us this beautiful planet. For example we may see a chicken on our plate, as a thing, as food. But we may also perceive it as a moving soul. The addiction to seek the confirmation of existence only on the matter level turns sour when we seek the physical confirmation of a non-physical phenomenon. For example when we try to convince ourselves of the reality of the love of another person only on the physical level – we will ask them to prove their love; and as nobody can do that, the love affair will end…